I love how my #BibleReadingPlan brings together similar themes throughout the Bible. Yesterday’s theme was God’s compassion . . . even for our enemies.

I started in Jonah. This is a story I thought I knew inside and out since the time I was a kid in Sunday school. Jonah ran away from God; God pursued him; big fish ate him. He finally obeyed God, but was mad and pouting. I’ve been Jonah a million times.

But yesterday I discovered something different in the book of Jonah.

Why was Jonah so reluctant to go to Nineveh and so mad when God didn’t destroy the Ninevites? Nineveh (located in modern-day Mosul, Iraq) was the capital of the Assyrian Empire. Going back even further in childhood Sunday School lessons . . . remember Noah’s three sons – Shem, Ham and Japheth? After the flood they got off the ark and went out to re-populate the world. Ham’s descendants built the city of Nineveh.

Nineveh and the Assyrian empire were enemies of Israel. Nineveh was the capital of the most powerful empire in the ancient world. Throughout the Old Testament Assyria attacked Israel and had taken it captive (2 Kings 17) and was known as a ruthless nation (Isaiah 10).

Dr. Simon Anglim, a historian in the Department of War Studies at King’s College London, wrote:

The Assyrians created the world’s first great army and the world’s first great empire. This was held together by two factors: their superior abilities in siege warfare and their reliance on sheer, unadulterated terror. It was Assyrian policy always to demand that examples be made of those who resisted them; this included deportations of entire peoples and horrific physical punishments. One inscription from a temple in the city of Nimrod records the fate of the leaders of the city of Suru on the Euphrates River, who rebelled from, and were reconquered by, King Ashurbanipal:

I built a pillar at the city gate and I flayed all the chief men who had revolted and I covered the pillar with their skins; some I walled up inside the pillar, some I impaled upon the pillar on stakes.” Such punishments were not uncommon. Furthermore, inscriptions recording these vicious acts of retribution were displayed throughout the empire to serve as a warning. Yet this officially sanctioned cruelty seems to have had the opposite effect: though the Assyrians and their army were respected and feared, they were most of all hated and the subjects of their empire were in an almost constant state of rebellion (185-186).

In Psalm 83 the author is crying out to God to destroy these enemy countries:

“O my God, scatter them like tumbleweed, like chaff before the wind! As a fire burns a forest and as a flame sets mountains ablaze, chase them with your fierce storm; terrify them with your tempest. Utterly disgrace them until they submit to your name, O LORD. Let them be ashamed and terrified forever. Let them die in disgrace. Then they will learn that you alone are called the LORD, that you alone are the Most High, supreme over all the earth.” Psalms 83:13-18

God saw the evil in Assyria. He knew what they had done to Israel in the past and the destruction they would do in the future. He had heard the prayers from Israel for the complete decimation of Assyria.

But our God is merciful. Loving. Patient. Compassionate.

When Jonah looked at Nineveh he saw ruthless enemies who deserved to die.

And he chose to send Jonah to give these enemies a second chance.

Jonah didn’t run from God because he was scared. Or lazy. Or jealous.

Jonah ran away because he hated Nineveh. He wanted Nineveh to be destroyed. He would have rather died than see God showing compassion to Nineveh.

When the people of Nineveh repented and turned from their evil ways God showed them mercy.

“So he complained to the LORD about it: “Didn’t I say before I left home that you would do this, LORD? That is why I ran away to Tarshish! I knew that you are a merciful and compassionate God, slow to get angry and filled with unfailing love. You are eager to turn back from destroying people.” Jonah 4:2

The book of Jonah is about God’s compassion for humanity.

It is about God’s slowness to anger and His eagerness to forgive even the worst offenders.

The book of Jonah is a love story.

I’m on Day 11 of the 30 Day Kindness Challenge. The recipient of my supposed “kindness” is my husband.

Days 1-5: went pretty well. I was excited, figuring out the challenge, seeking ways to be kind, etc.

Days 6-7: were OK. I was busy preparing for a trip with my daughter and was doing laundry, making to-do lists for my husband, packing, etc. I did give my husband a pair of Pittsburgh Steelers sunglasses, which he seems to like (and looks really sexy in).  I didn’t put a whole lot of effort into being kind, but I wasn’t mean either.

Days 8-9: I was out-of-town. Sent a few nice text messages about missing him. Easy!

Day 10: I was tired from my Passport2Purity Getaway with my daughter. My husband had been up late at a golf tournament the night before. He got a speeding ticket. The house was a mess. I was not nice. First thing in the morning I complained about him. Then I complained to him. I did a lot of grumbling with a side of yelling. For some reason housework makes my irritation level rise about 200 degrees. I definitely didn’t say anything nice. (Though I did begrudgingly give him a pocket knife he had been wanting) Last night we went to a birthday party and I had been planning to compliment him in front of his friends . . . but that didn’t happen.

My lack of kindness – and my abundance of frustration – brought the whole mood of my house down. My kids started complaining and bickering. My husband pulled back and didn’t really talk to me the rest of the day. It was not a good day. I was not a good wife. And I set a horrible example for my kids.

Day 11: 7:30 a.m. Only my dog and I are awake (side note, I love my dog because no matter how I act she never gets upset with me). It is just me, the dog and my coffee. And Jesus. And the reminder that God’s mercies are new every morning. Thank goodness for that. I need a lot of mercy.

Yet I still dare to hope when I remember this: The faithful love of the LORD never ends! His mercies never cease. Great is his faithfulness; his mercies begin afresh each morning. Lamentations 3:21-23

Once the footsteps start I am going to need to apologize for my lack of kindness and losing my temper. And ask for grace.

And I am going to need to come up with some pretty off-the-charts kind words and actions for today. 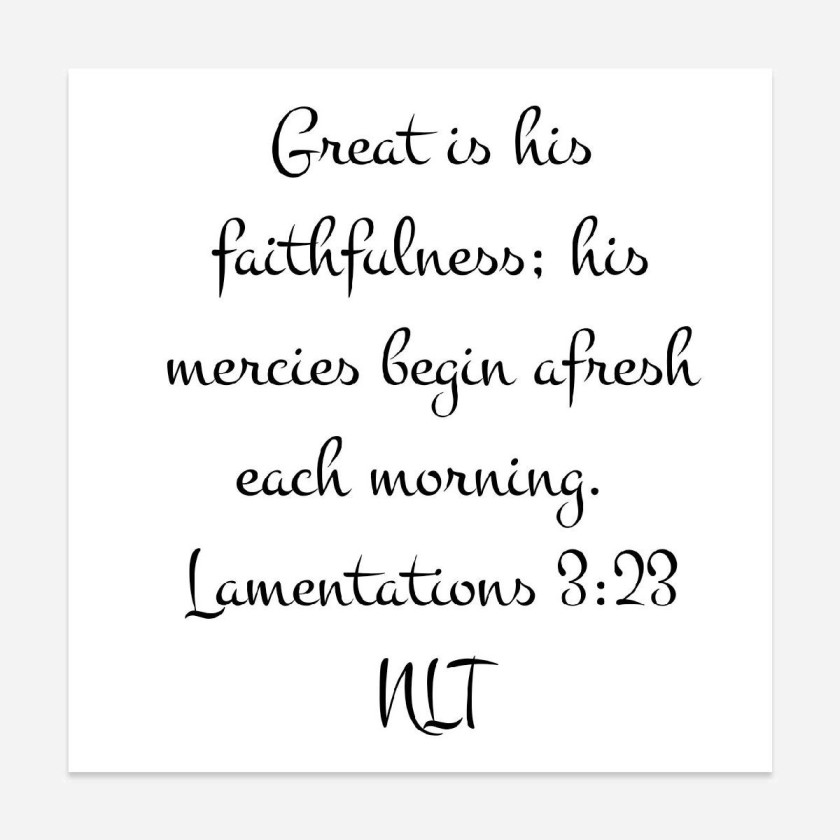