The story of David and Bathsheba is very famous – King David saw a beautiful, naked, (married) woman, wanted her, slept with her, got her pregnant and then tried to get her husband to sleep with her so that the husband would think he was the baby-daddy. When that failed, David had her husband killed so he could marry Bathsheba.

But did you know that David had other wives? He has at least eight wives. His first wife was a trophy wife, given to David by her father, King Saul, for David’s success on the battlefield.

Another wife was Abigail. In today’s reading (I Samuel 25) it told her story prior to marrying David. Abigail was a very intelligent woman and a very beautiful woman.  But she was married to a jerk named Nabal. Nabal was rich and crude and mean. 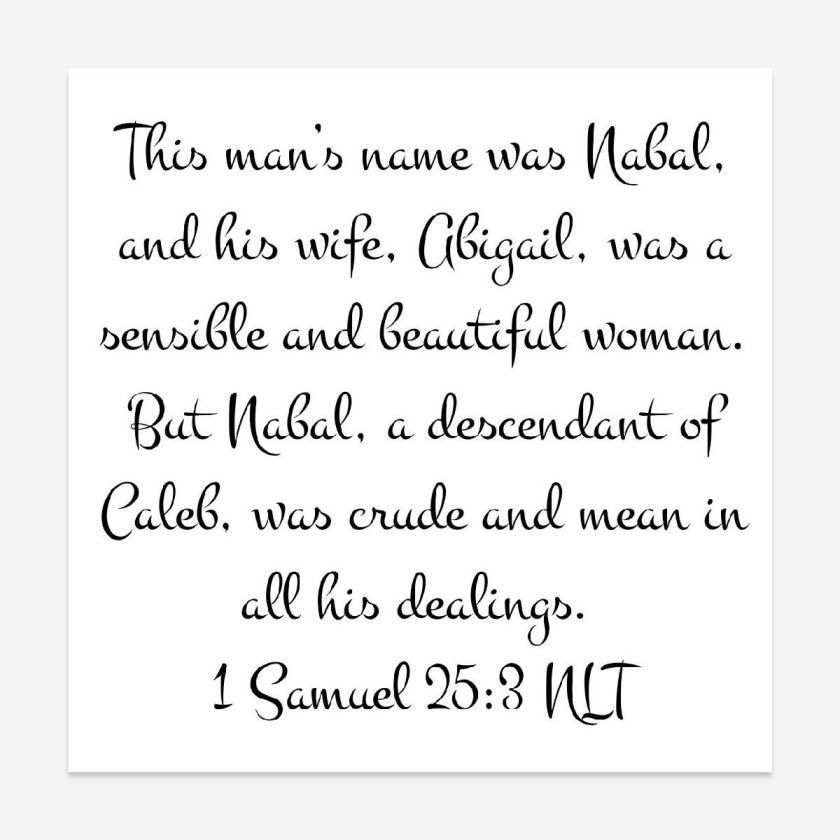 Nabal had a bunch of people who worked for him and David and his men had always treated them very well.  One day David went to Nabal and asked him for some food and supplies, but Nabal refused. David was furious.  So furious he decided to go kill Nabal and his entire household.

When Abigail heard that David and his men were coming to kill her family she acted quickly.  She loaded up food and supplies and went to meet David, to apologize, offer the goods, and ask David to spare them.  David listened and thanked her for stopping him from making a horrible mistake by killing a bunch of innocent people.  And eventually, after Nabal died, David went back and married Abigail.

So what are some lessons we can learn from Abigail?

And save it she did.  David relented and thanked her for saving him from killing everyone.

When Abigail got home her husband was drunk and partying, so she didn’t tell him anything.  In the morning, when he was sober, she told Nabal.  He was so shocked he had a stroke and died 10 days later. When David heard about Nabal’s death he came back and asked Abigail to marry him; and she said yes.

While I don’t know a whole lot about Abigail, she is someone I admire.  She wasn’t a raging Mama-Bear (which I tend to be), but more of a thoughtful, stealth Leopard.  She was adaptable, opportunistic, and intelligent.  She didn’t tolerate intrusion on her household and was ready to fight, but not with weapons. She used her words, intelligence and experience to calmly take on 401 soldiers. And she won.

2 thoughts on “Lessons from Abigail”